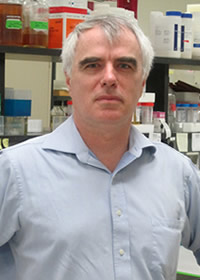 David McKinnon received a B.Sc. in Physiology from the University of New South Wales, Australia, in 1983 and a Ph.D. in Physiology from the John Curtin School of Medical Research, Australian National University in 1987. Between 1987 and 1990, he was a Post-Doctoral Fellow at the Salk Institute and then at Washington University. In 1991 he joined the State University of New York at Stony Brook as Assistant Professor of Neurobiology and Behavior and was promoted to full professor in 2005.

Remarkably little is known about the evolution of complex physiological systems, as opposed to the evolution of individual physiologically important proteins. Regualtions of ion channel expression is critical for the maintenance for the function of electrically excitable cells. Surprisingly, human genetic studies have shown that there is little feedback regulating channel expression fromt the remaining allele or from other genes that could compensate for loss. In principle, there are a large number of points at which homeostatic regulation could act to control ion channel expression, but in practice, very few homeostatic regulatory mechanisms appear to function in the adult. Understanding what homeostatic mechanisms are and are not, available to regulate the function of these systmes is the focus of our research. We use conditional knockout mice in which we selectly eliminate one or both alleles of a given ion channel gene in the adult mouse in order to study the consequences of that loss on the molecular and cellular physiology of the animal.

See our laboratory web page for more details on these projects and work in the laboratory.