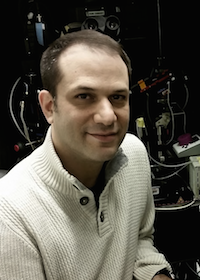 Josh Plotkin received undergraduate degrees in Biology and Music from the University of Michigan in Ann Arbor.  He then attended the University of California, Los Angeles, where he received his PhD in Neuroscience.  He was a postdoctoral scholar at UCLA and then at Northwestern University.  He joined the faculty of Stony Brook University in 2015, where he is now an assistant professor in the department of Neurobiology and Behavior, and a member of the Center for Affective Neuroscience of Depression and Anxiety (CANDA).

At any given moment, our brain is confronted with the daunting task of sorting through a plethora of potential actions that can be performed.  Some of these actions are useful and appropriate, and should be green lit.  Others are inappropriate, and must be suppressed.  The brain has several strategies to streamline this process, one being habit learning- through repetition, the brain can learn to initiate an automatic response based on what has worked in the past and what has not.  The inability to properly do this is at the crux of many neurological disorders- perhaps most notably, obsessive compulsive disorder (OCD). Our lab’s research focuses on the part of the brain most intimately associated with this type of action selection and habit learning: the basal ganglia.  The major input nucleus of the basal ganglia, the striatum, is charged with receiving massive amounts of information from wildly diverse parts of the brain.  The striatum sorts and integrates this synaptic information and then passes it on to the output nuclei of the basal ganglia, which ultimately make a recommendation about which actions should be performed.

We are interested in understanding how the striatum accomplishes this, and what goes awry in disease states.  We use cutting edge physiological and imaging techniques to dissect the microcircuitry of the striatum, ask how specific synaptic connections within this circuit are plastically adjusted to optimize behavior, and determine how this is altered in neurological disorders such as OCD.  To do this, we pair electrophysiological recordings with 2-photon laser scanning microscopy to record from identified striatal neurons in genetically altered mice.  We probe the local activity of postsynaptic dendritic sub-regions using 2-photon calcium imaging, and activate individual, visually identified synapses using 2-photon photolysis of glutamate and optogenetic activation of specific afferents.  The combination of these tools lets us interrogate the striatum in a way that has traditionally not been possible, and opens exciting new doors to uncover the underpinnings of disorders such as OCD.
END_OF_DOCUMENT_TOKEN_TO_BE_REPLACED