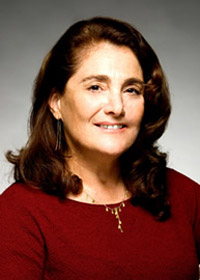 Lorna Role earned a B.A. degree in Applied Mathematics in 1975 and a PhD in Physiology in 1981, both from Harvard University . After three years of postdoctoral study with Dr Gerald Fischbach she was appointed an Assistant Professor in the Department of Anatomy and Cell Biology in the Center for Neurobiology and Behavior at Columbia University. She was promoted to Associate Professor with tenure in 1992, and in 1996 was promoted full Professor. From 1996 to 2008, she also held the position of Research Scientist at the New York State Psychiatric Institute. In 2001 she was elected a member of The American College of Neuropsychopharmacology (ACNP). In 2006 she was awarded the Sidney R. Baer, Jr. Prize for Innovative Research related to Schizophrenia (NARSAD) and in 2007- 2008 received a second NARSAD Distinguished Investigator Award. In 2008, she joined the State University of New York at Stony Brook as Professor and Chair of the Department of Neurobiology and Behavior. In 2009 she was advanced to Fellow of the ACNP and in 2010 was the recipient of an NIH Directors Pioneer award. In 2011 she has become a member of the American Association for the Advancement of Science and in 2016 she has been named a SUNY Distinguished Professor.

Cholinergic signaling in circuits underlying emotionally salient memory
Central cholinergic circuits, which provide important modulatory control of synaptic excitability, have been strongly implicated in cognitive impairments associated with neuropsychiatric diseases including schizophrenia, depression, and Alzheimer’s dementia. The Role laboratory studies the generation, plasticity, and maintenance of cholinergic and cholinoceptive synapses in the mammalian brain. Current work focuses on dissecting the role of cholinergic signalling in circuits and behaviors related to emotional salience in learning and memory. In collaboration with the laboratory of Dr David Talmage (through the CNS Disorders group of the Centers for Molecular Medicine) , the Role lab is testing the hypothesis that products of the neuregulin-1 gene - a novel class of signaling molecules - are essential to the maintenance of central cholinergic circuits. As the neuregulin-1 gene has been strongly implicated as a susceptibility locus for schizophrenia, current work could provide important insight into the role of Nrg1 at synapses and circuits whose function and dysfunction may underlie this and other neuropsychiatric disorders.