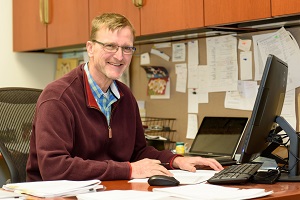 Lonnie Wollmuth attended Portland State University and received a B.A. degree in 1983 and an M.S. degree in 1988. In 1992 he earned a Ph.D. in Physiology and Biophysics from the University of Washington, Seattle working under Dr. Bertil Hille. From 1993 to 1998, Dr. Wollmuth was a Senior Fellow in the Division of Cell Physiology at the Max Planck Institute for Medical Research working with Professor Dr. Bert Sakmann and was a Human Frontier Science Program Fellow from 1993-1995 and an Alexander von Humboldt Fellow from 1996-1997. In 1998, Dr. Wollmuth joined the faculty in the Department of Neurobiology and Behavior at the State University of New York at Stony Brook as an Assistant Professor. In 1999-2002 he received an Alexandrine and Alexander Sinsheimer Scholars Award. He was promoted to Associate Professor with tenure in 2003 and Full Professor in 2009. He has served as Director of the Graduate Program in Neuroscience at Stony Brook since 2006. Professor Wollmuth is a member of the Center for Nervous System Disorders at Stony Brook University and is a member of the Society for Neuroscience and the Biophysical Society.

Research in my laboratory addresses fundamental mechanisms underlying fast synaptic transmission in the brain, focusing on those synapses that use glutamate or GABA as a neurotransmitter. Synapses are specialized structures that control the flow of information between cells in the brain. Since glutamate and GABA are the major excitatory and inhibitory neurotransmitters, respectively, in the human brain, synapses that use these neurotransmitters are fundamental to all brain functions. Indeed, alterations in the properties of glutamatergic synapses underlie changes in brain function including those associated with learning and memory, and contribute when disfunctional, to numerous neurodegenerative and psychiatric diseases. Glutamate receptors aare ligand-gated ion channels that convert the chemical signal glutamate into an electrical and biochemical signal detected by the postsynatic neuron. These receptors, notably the NMDA, AMPA and kainatereceptor subtypes, display a variety of  molecular and biophysical properties that contribute to their versatility and prominence in fast synaptic transmission. We are interested in the molecular, biophysical a nd physiological mechanisms of glutamate receptor function. This work extends from understanding molecular structures of glutamate receptors and associated proteins to how the dynamics of glutamatteric synapses contribute to networks of interconnected neurons. Our systems work focuses on mechanisms regulating synaptic plasticity in layers 2/3 of the visual cortex. Since we want to understand the details, our approach is molecular and cellular in orientation and highly quantitative.