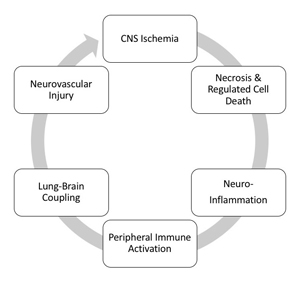 Between advances in perfusion-based neuroimaging and the expanded

use of thrombolytics and mechanical thrombectomy, the past decade has been whiteness to a fundamental shift in the way we diagnose and treat ischemic brain injury. While several agents are currently in phase III trials, there remain no approved neuroprotective agents for use in either acute ischemic stroke (AIS) or cardiac arrest.

Acute brain ischemia induces a cascade of cell-autonomous and non-autonomous responses, which remains a fundamental challenge to developing such interventions.  In addition to triggering neuronal necrosis and regulated cell death, ischemia-induced neuroinflammation contributes to neuron loss and impedes functional recovery. In addition, the shedding of damage-associated molecules from the post-ischemic CNS exacerbates neurovascular reperfusion injury by amplifying peripheral immune activation.

Areas of active investigation within our group include: