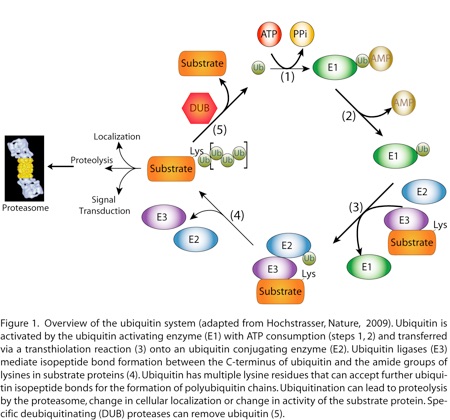 The system is hierarchically organized with two E1, ~40 E2 and more than 600 E3 proteins in the  addition to the components of the enzymatic cascade, the system is rich with substrate binding subunits, activators and inhibitors, deubiquitinating enzymes, polyubiquitin ligases, and ubiquitin binding proteins, all of which are necessary for regulated ubiquitination of cellular proteins.  Furthermore, kinase activators such as cyclins and inhibitors such as p27 are targets of both phosphorylation and ubiquitination and therefore mediate interplay between these two signaling mechanisms.  Because ubiquitination has a fundamental role in cell signaling, the ubiquitin system is a key player in the immune response and the development of cancer.

Cell biological and biochemical studies have defined a continually growing number of components in the ubiquitin system and characterized their biological effects.  However, the orchestration of these components remains poorly understood.  For example, little is known about the target spectra of individual ubiquitin ligases or how the catalytic complexes assemble correctly amidst competition between many potential binding partners.  We are developing new methods to identify the substrate spectrum of ubiquitin ligases and conjugating enzymes. 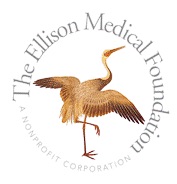 We gratefully acknowledge support for this project by the Ellison Medical Foundation New Scholar in Aging Award.