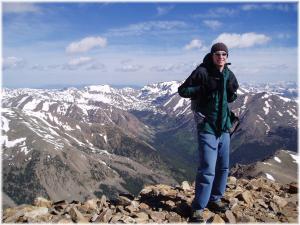 Broadly, my research interests lie in the field of early hominin evolution and biomechanics. My dissertation research is specifically focused on aspects of trunk and upper body morphology in humans and chimpanzees in order to understand how morphology contributes to stability during bipedal locomotion.

First, I am quantifying and characterizing motion between the pelvis, lumbar vertebrae, thorax, and head during bipedal locomotion in humans and chimpanzees. Using this information, I am creating a framework from which to understand the relationship between axial morphology and aspects of bipedal locomotor performance in hominids. Further, through this study I am investigating mechanisms thought to be inherent to human bipedalism, such as conservation of angular momentum and the upper body’s contribution to center of mass mechanics.

Second, as one of the inherent ‘goals’ of the body during locomotion is to stabilize the head for effect sensory feedback, I am performing a kinematic investigation of head motion and its relationship to gait in both humans and chimpanzees. This study will highlight the unique demands and strategies used by humans to maintain their unique upright form of bipedalism, and will also further our understanding of the role of the semicircular canals during locomotion. These sensory feedback organs have been used to infer locomotor shifts in hominins, but the relationship between head motion and canal morphology is poorly understood.

Third, I am investigating one of the major sources of instability during human bipedalism, the propagation of shock waves following heel-strike. Preliminary investigations show that these shock waves are present in chimpanzees during locomotion. By understanding how the chimpanzee postcranial anatomy serves to dampen such shock waves between the head and feet, we will be better able to understand when and how shock-absorbing mechanism appeared in hominins.

Ultimately, my research seeks to understand the nature of bipedal locomotion in the earliest hominins, and how this evolved into the unique striding bipedalism that we see in humans today.