Contrary to what most people think, it was not our big brains that first set us apart from our apelike ancestors, but rather it was our distinctive upright posture and locomotion.  Stony Brook researchers have a 30 year history of investigating the how and why of this initial step in human evolution.  While the energetic efficiency of modern human walking as well as the free use of our hands to make tools seem like obvious advantages, we don’t really gain these benefits until at least some of the physical changes in our limbs needed to allow us to walk upright were already in place.  By studying our nearest relatives, nonhuman primates, all of whom can walk bipedally for short intervals, Stony Brook researchers have tried to reconstruct the factors that led to our form of walking.  A basic first step in this endeavor is determining the form of locomotion that our earliest ancestors used.  Can we identify aspects of the locomotion of living primates that suggest a favorable starting point?  One of the early key findings from the Stony Brook lab was that patterns of muscle use in apes and monkeys when climbing vertical trees trunks was similar to that used in during biped walking, suggesting that an ancient ape that frequently engaged in vertical climbing would find it easier to become bipedal.  Research from the lab has also shown that apes and humans use the same muscles to control side-to-side hip balance in bipedal walking, which greatly facilitated our understanding of how changes in the pelvis observed in the fossil record were related to how the earliest human ancestor walked.

Our most recent project involved using state-of-the-art computer modeling and lab-based experimental techniques to study the mechanics, energetics, and control of bipedal locomotion in chimpanzees. In collaboration with researchers at UMASS Amherst, a computer model of the chimpanzee musculoskeletal system has been developed that is being used to generate simulations of bipedal walking. My research documenting muscle activity patterns is used for model construction and validation.

Muscle activity consists of waves of action potentials along muscle cells collected into motor units. A sensor (electrode) placed in the vicinity of these muscles cells detects the summations of multiple motor unit action potentials: EMG.  Nylon insulated bipolar fine-wire electrodes are placed in the muscles of interest and connect to a four-channel FMtelemtry transmitter package that is affixed to the back of the animal subject by a nonrestrictive harness.  The transmitted EMG signals are detected by an FM receiver and sent to an A-D converter.  The digital signal plus a simultaneous video image of the subject is recorded on a PC using the ProCapture software package (Xcitex, Inc.) and later analyzed to collect samples of step cycles using ProAnalyst (Xcitex, Inc.).

The EMG activity is quantified as a running root mean square: 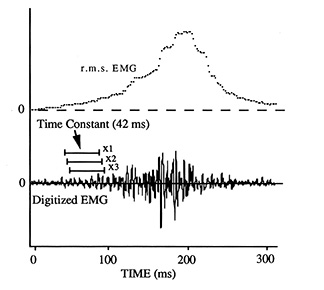 Samples of ~ 25 steps/per recording are summarized as quartile distributions: 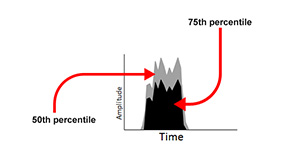 To create a representative activity profile for each muscle, plots of the 75th plus 50th percentile distributions of EMG activity during a sample of steps (scaled to the maximum burst observed during the recording session) for different recordings from the same individual, and for recording from the two individuals, are made semitransparent and superimposed. Plots of these activity profiles are presented here along with dissection images of chimpanzee lower limb muscles (adapted from Diogo et al., 2013).