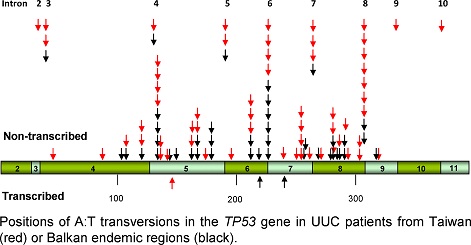 Aristolochia plants have been used worldwide for medicinal purposes for more than 2500 years, and this practice is still common in many cultures today, particularly in Asia. In Taiwan, where the incidence of upper urinary tract urothelial carcinoma (UUC) and of chronic kidney disease is the highest in the world, at least one-third of the population has been prescribed herbs containing aristolochic acid (AA). This prompted us to determine if ingestion of Aristolochia-based traditional medicines contributes significantly to the high frequency of kidney disease and UUC in Taiwan, representing an under-reported, but widespread, iatrogenic disease. Remarkably, the unique TP53 mutational signature for AA established in our studies of UUC cases associated with Balkan Endemic Nephropathy was recapitulated in a series of UUC cases from Taiwan. DNA adducts formed with AA metabolites were detected in the majority of patients with signature A:T transversion mutations in TP53, indicating a strong connection between AA exposure and its carcinogenic effect. Thus, despite different modes of exposure (in Balkan cases, chronic low-dose dietary exposure, and in Taiwan, higher amounts of AA ingested intermittently for medicinal purposes), both the pathophysiology and molecular biomarkers of UUC are similar.

It is estimated that 100 million people in China alone have taken Aristolochia herbal remedies, highlighting the potential morbidity and mortality associated with the medicinal use of these herbs. Thus, an important goal of our current research is to document exposure to AA and its relationship to kidney disease and UUC in countries where Aristolochia is known to be used in the practice of Traditional Chinese Medicine, These studies are underway in collaboration with urologists and nephrologists in China and other Asian countries.  A second goal is to develop and validate biomarkers, detectable in urine or blood, that can be effectively used for diagnostic surveillance. The mutagenic DNA adducts caused by AA persist for decades in target tissues, thus populations at risk of UUC should be screened for evidence of this disease, as early diagnosis increases significantly the chances of a surgical cure.