The SAMR model
The SAMR model is a way to think about how educators leverage digital technology in the classroom. The model has four levels (Substitution, Augmentation, Modification, and Redefinition) that help educators transform teaching and learning by asking “How am I using this technology?” rather than asking “What technology am I using?". To help illustrate this concept, we will borrow Tim Holt’s SAMR Model and Starbucks Coffee metaphor. 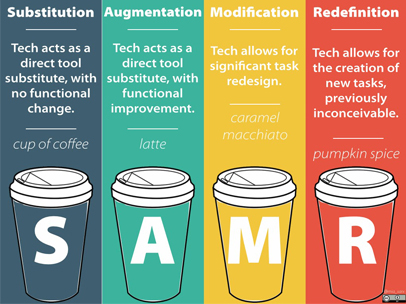 Substitution
At the substitution level, you substitute a cup of coffee made at home for a cup of coffee purchased at Starbucks. There is a format change, but no functional change. In the context of mMEdEd, this could mean using an eBook version of a textbook instead of the printed version of a textbook. Or asking students to annotate instructors' presentations downloaded on their iPads instead of printing out the slides.

Augmentation
At the augmentation level, you buy a latte. You’ve added some bells and whistles, but you’re still essentially buying a cup of coffee with steamed milk on top. There is a format change and some added functionality, but the task would still be reproducible without the technology. In the context of mMEdEd, this could mean embedding formative assessments into recorded lectures or custom eBooks.

Modification
At the modification level, you order an iced caramel macchiato. You might be able to reproduce one at home, but without the Starbucks syrups and whipped cream, it would be significantly more difficult. In the context of mMEdEd, this could mean asking students to collaborate in real time in a whiteboard app, while displaying that app on the classroom projector. Or it could mean asking students to record reflections on iMovie and using another app to leave them comments embedded in the video.

Redefinition
At the Redefinition level, you order a pumpkin spice latte. Only Starbucks can make a pumpkin spice latte. They even have a trademark to make sure it stays that way. In the context of mMEdEd, this could mean asking students to use apps to create 3D models to prototype assistive technologies. Or it could mean asking students to create their own evidenced-based medicine (EBM) case studies and putting them in software that makes an interactive EBM primer.

Different levels of technology use may be appropriate in different situations, depending on the learning objectives and students’ level of involvement. Each faculty member should figure out what works for his/her specific contexts.