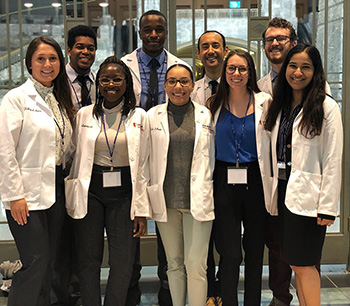 The Stony Brook SNMA hosted a lunch where we invited students to take the Implicit Association Test as a springboard for further reflection and discussion on implicit biases and how they manifest in medicine.

In May 2019 we hosted the event on implicit bias in medicine. We invited everyone to take the Implicit Association Test (https://implicit.harvard.edu/implicit/takeatest.html) prior to attending or at the very beginning of the event. The test is designed to obtain some sort of quantitative measure of implicit biases that may exist in pairings such as black and white race, fat and thin bodies, or gender and science. We focused on racial biases, but opened discussion to any test people took. After taking the test, we briefly discussed the strengths and shortcomings of the IAT, and then invited people to share their test results with the group and reflect on its significance. We also watched a video clip summarizing some research on implicit biases in medicine, and suggested some further reading from academic journals.

In March 2019, we hosted the screening of the Ava Duvernay documentary 13th, which examines how the modern prison-industrial complex sustains racial and social inequities rooted in the history of slavery. We used the themes from the movie to further discuss structural racism within modern medicine. We also discussed the paper "Structural competency: Theorizing a new medical engagement with stigma and inequality" by Jonathan Metzl and Helena Hansen, which we invited attendees to read prior to the event.