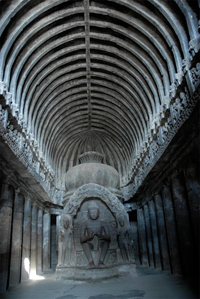 Assistant Professor Arno Klein recently returned from a trip to India where he and his wife Deepanjana, a specialist in South Asian Modern and Contemporary Art at Christie’s, completed a comprehensive photographic documentation of the Ellora Cave Temples.  The Ellora Caves are a World Heritage Site which consists of Buddhist, Hindu, and Jain temples carved from volcanic rock between 1,500 to 1,000 years ago.

The couple, who have been engaged in the project for over a decade, were accompanied by their daughter, Ellora, and Christie’s employee Tristan Bruck, who helped geolocate more than 7,000 annotated images of sculptures, paintings, and architectural details on century-old floor plans. The result is an interactive website that allows visitors to navigate the temples by moving a cursor over the floor plans. The photographs were taken by Arno Klein and annotated by Deepanjana Klein after field notes by Professor Walter Spink of the University of Michigan. The project was funded in part by the ARTstor Foundation and the government of India.