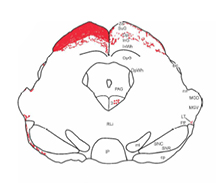 An article by Lawrence Morin, PhD and Keith Studholme published in the Journal of Comparative Neurology provides the first comprehensive anatomical map of the visual projections in the common laboratory mouse and compares the authors’ findings to the results of previous studies.

Using the most sensitive tracer available, Dr. Morin and Mr. Studholme identified 46 regions of the brain innervated by projections from the retina of the laboratory mouse, including 14 that had not previously been described in this species. Some of the brain regions are associated with the formation of visual images; others are involved in control of circadian rhythms, pupil dilation, wakefulness and other non-image forming reactions to ambient light. A map of the anatomical connections between the eye and the regions of the brain is important for understanding how light affects physiology and behavior.

Scientists have studied the visual system of animals for decades, concentrating primarily on the classical system which translates light signals into visual representations. The more recent discoveries of a non-image forming visual system and a previously unknown class of photoreceptive retinal cells distinct from the well-known rods and cones have stimulated a renewed interest in the structure and function of the visual system. Retinal projection patterns of several rodent species have been studied in detail, but this is the first comprehensive study of such projections in the common lab mouse, now widely used is vision research.

Dr. Morin and Mr. Studholme found that the visual projection patterns in the mouse are generally similar to patterns found in other rodent species, but differ materially with respect to details. They point out that the number of brain regions identified in their study (46) is contingent upon the specific definitions of brain regions, and the willingness of investigators to split regions or lump them together. Despite the vagaries of nomenclature in brain anatomy, there is enough common ground among studies of visual systems in rodents to make meaningful comparisons among them. The authors note the convergence of retinal projections onto numerous brain regions that also receive sensory input from the olfactory and auditory systems.

The article, titled "Retinofugal Projections in the Mouse" was published by the Journal of Comparative Neurology online on May 30, 2014.