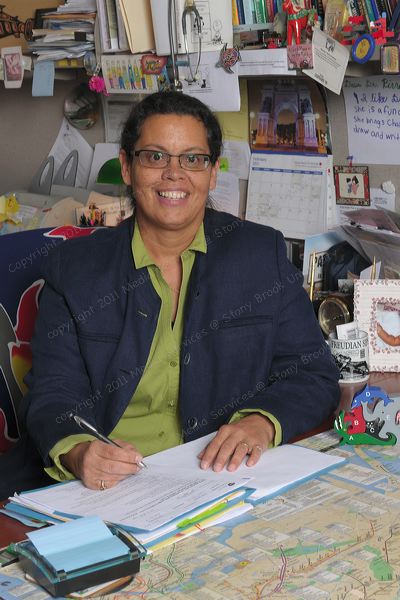 October 20, 2014 – On November 3, 2014, at 5:00 p.m., E. Victoria Rundberg Rivera, MD will retire from the Department of Psychiatry to take care of her elders and fulfill her life-long dream of becoming a writer on the Caribbean island of St. Croix.

A product of the department’s residency and fellowship programs, Dr. Rivera spent the past 15 years in what she calls a “golden job” as a researcher, educator and consulting psychiatrist for Western Suffolk BOCES. “I love my job,” Dr. Rivera said, “but I want to write stories about my life. It’s been an interesting one.”

Indeed it has. Adopted out of an orphanage as an infant, she was raised in Parachute, Colorado, a “dirt road town, too small to have a doctor,” by a Swedish father and Puerto Rican mother. At age 17, she came east to live with an aunt while studying Biology at City College. She earned her medical degree at the Albert Einstein College of Medicine and spent a year as a pediatric intern at Montefiore Medical Center before being sidelined by a severe case of encephalitis. The following May, she joined the Psychiatry residency program at Stony Brook, where she eventually became Chief Resident. “The department gave me a second chance, and I never looked back,” Dr. Rivera said.

After residency, she completed a Geriatric Fellowship with Lory Bright-Long, MD and a Child Fellowship with Gabrielle Carlson, MD, then spent her career as an Assistant Professor and attending physician in the Child Division. Her principal assignment was at Western Suffolk BOCES, a therapeutic learning community where she helped students “prepare for the real world” by developing their life skills. “I encourage my students to follow three rules,” Dr. Rivera said, “Show up. Work to the best of your ability. Manage your behavior. It takes practice.”

She became the director of the division’s school consult program in 2013. In addition to consulting, Dr. Rivera sees patients as an Attending physician and participates in clinical research. She was involved in more than 20 studies in the Division of Child and Adolescent Psychiatry, was the primary clinician at Stony Brook for a multi-site study of treatment for childhood ADHD with severe aggression, coauthored several papers and is first author of an upcoming CME article in Child & Adolescent Psychopharmacology News.

The minute she becomes eligible for retirement, Dr. Rivera will retire to take care of her elders, including her 87 year old mother, 84 year old aunt and 90 year old blind uncle. She has plans to write her memoirs, woodwork, garden and swim. “Writing is my first love,” Dr. Rivera said, confessing that she became a doctor to avoid becoming a starving writer. “I didn’t want to be poor,” she said, “and I loved science. I have no regrets, but I am stepping away now to minimize the chances of ever having to say, ‘Oh man, I wish I had done that.’ Besides, giving back is important. I was supported by my extended family and wouldn’t be a doctor if not for them. They are thrilled that I will be nearby.”