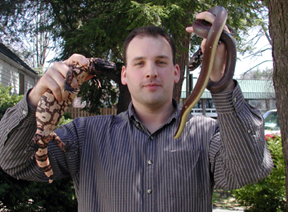 The general focus of Dr. Kley's research is the evolution of form and function in squamate reptiles (snakes and lizards). Although his interests in this area are broad, spanning numerous functional and anatomical systems, most of his current research focuses on the evolution of the head skeleton and pelvic apparatus in snakes, two character complexes of central importance in the ongoing controversy surrounding the phylogenetic origin and early diversification of snakes.

Dr. Kley's studies of the ophidian skull and jaw apparatus are motivated primarily by his interests in the functional and evolutionary morphology of snake feeding systems. Specifically, he is interested in the mechanisms by which snakes capture, ingest, transport, and swallow their prey and how these mechanisms evolved from those used by non-ophidian squamates ("lizards"). Current emphasis in this research is on broadly comparative studies of feeding performance and cranial morphometrics. An overarching objective of these studies is to identify osteological correlates of macrophagy, the remarkable ability exhibited by many snakes to swallow prey whole that are nearly as large, or even larger, than themselves. In addition, the quantitative data emerging from this work will facilitate objective statistical tests of competing hypotheses concerning the evolution of macrophagy within Serpentes.

Dr. Kley uses a variety of research techniques in his studies of the ophidian feeding apparatus, including X-ray videography, high-speed videography, high-resolution X-ray computed tomography, histology, immunohistochemistry, and gross dissection. In addition, he has established at Stony Brook a large and diverse colony of live snakes for his research and that of his students, collaborators, and visitors. Currently, he maintains well over 100 individual snakes, including nearly 30 species representing most major clades within Serpentes.

Although Dr. Kley's primary research interests relate to the structure, function, and evolution of the head skeleton of snakes, he is also currently involved in a large-scale comparative study of the ophidian pelvic apparatus (i.e., pelvis and hind limbs). Specific emphasis in this work is on identifying patterns of limb reduction and loss among extant snakes, and interpreting these patterns within a phylogenetic context. A major goal of this research is to provide a more robust evolutionary framework for interpreting the significance of four highly controversial Cretaceous fossil snakes with 'well-developed hind limbs', Najash, Pachyrhachis, Haasiophis, and Eupodophis.

Finally, in addition to the research outlined above, Dr. Kley and members of his lab group have recently become involved in several paleontological collaborations with other faculty members in the Department of Anatomical Sciences, including Drs. Krause, Turner, Seiffert, and O'Leary. Collectively, these recent collaborative projects have been diverse in nature, and have included studies of a crocodyliform from the Late Cretaceous of Madagascar, an acrodont lepidosaur from the late Eocene of Egypt, and several snakes from the Late Cretaceous of Madagascar, late Eocene of Egypt, and Eocene of Mali.