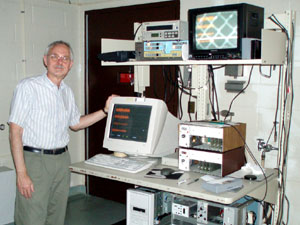 Past Research : The evolution of muscle function in nonhuman primates and humans; origins of hominid bipedalism.

Reconstructing the pathways of nonhuman primate and human evolution often depends on knowing the functional significance of (1) osteological features characterizing fossil primates, (2) musculoskeletal similarities between living species, and (3) postcranial anatomical traits unique to humans. All three instances require a knowledge of muscle function and the ways in which bony changes might influence such function. Such knowledge is obtainable only by in vivo physiological techniques. In collaboration with colleagues at Stony Brook, Jack Stern devoted 40 years to conducting telemetered electromyographic experiments on monkeys, apes, and humans in order to identify the functions of specific muscles and explain how structure has evolved to promote such functions. The technique of electromyography using fine-wire electrodes allows precise determination of when muscles, or portions thereof, are recruited during normal behaviors. By combining this technique with telemetry and video recording, data on unfettered animals engaging in their total range of behaviors was garnered.

Although Dr. Stern was interested broadly in primate locomotor evolution, he had a specific interest in the origin of bipedalism among hominids. To this end, he joined with Stony Brook colleagues in analyzing fossil hominid postcranial material from Ethiopia, Kenya, and Tanzania. From their work has emerged the finding that the locomotor adaptations of the earliest known hominids were truly intermediate between apes and humans. Their most recent research focussed on using muscle recruitment patterns in chimpanzees to improve mathematical models of australopithecine bipedalism.