Department of Medicine
Division of Rheumatology, Allergy and Immunology 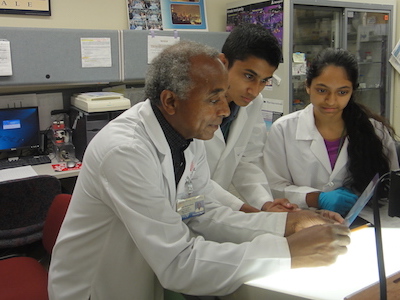 The major focus of Dr. Ghebrehiwet’s laboratory is to dissect the role of C1q and its receptors (cC1qR and gC1qR) in inflammation, infection, autoimmunity and cancer. The first component of complement, C1, is a multimolecular complex comprising of C1q and a Ca2+-dependent tetramer, C1r2–C1s2. The traditional role of C1q within this complex is to serve as a recognition signal–a potent signal that is readily translated into a highly specific and orderly intramolecular rearrangement resulting in a sequential proteolytic activation, first of C1r and then of C1s, thereby triggering activation of the classical pathway of complement. However, research conducted over the past several years has led us to understand that the role of C1q is not only restricted to recognition of immune complexes or other molecules that activate the classical pathway, but also is able to participate in a rapidly expanding list of pathological disorders–including autoimmunity, infection, trophoblast migration, preeclampsia, and cancer. C1q is new member of the TNF-α-like family of proteins that may have arisen from a common ancestral gene. This may in part explain why it has retained some of its ancestral "cytokine-like" activities. Moreover, the diversity of immunological functions mediated by C1q is reflected by the fact that it possesses two unique structural and functional domains: a collagen-like domain (cC1q) and a globular “heads” domain (gC1q), which is by and large responsible for its functional versatility.

Because cell surface proteins or receptors mediate most of the cellular functions of C1q, our laboratory has been singularly focused in the identification and characterization of such molecules. The first to be identified was a 60kDa protein–later found to be identical to calreticulin (CR). The preferential binding site for this protein is the cC1q domain and hence was designated cC1qR to more precisely reflect its domain specificity. cC1qR/CR which is predominantly localized in the storage compartments of the endoplasmic reticulum, is a multifunctional protein with a broad range of functions both inside and outside the cell including the on the cell surface. In 1992, while Dr. Ghebrehiwet was on a NIH-Fogarty supported sabbatical leave at the MRC Immunochemistry Unit at the University of Oxford, he identified, characterized and cloned a second C1q binding protein from Raji and U937 cells. This 33kDa molecule was found to bind C1q not only with a much higher high affinity than the cC1qR, but also bound to the gC1q domain, hence the designation gC1qR/p33 (also known as p32, HABP1). Although gC1qR is also found in the mitochondria as well as in other compartments of the cell, our interest focused on its surface expression and function. As molecule expressed on cell surfaces–in particular endothelial cells (ECs) and platelets–gC1qR recognizes and binds diverse ligands that are involved in various ways in the inflammatory response. Among these are diverse pathogen-associated virulence factors and antigens (Protein A of S. aureus, HCV core protein, gp41 of HIV-1, Hanta virus etc.), as well as plasma proteins of which C1q, vitronectin, fibrinogen, FXII and high molecular weight kininogen (HK) are the major ones. While binding to C1q induces a plethora of cellular functions that play a role in innate immunity and inflammation, binding of HK and FXII to gC1qR on the EC surface has been shown to initiate the assembly and activation of the contact blood coagulation system, leading not only to blood coagulation but also to inflammation through kallikrein formation and the generation of the nonapeptide bradykinin. Bradykinin (BK) is one of the most powerful vasoactive peptides known and can induce potent inflammatory changes in the endothelium. This in turn renders the sub-endothelial matrix accessible to blood components, leading to infiltration of vascular tissue by proinflammatory cells. BK is also responsible for angioedema (AE) including AE due to C1-INH deficiency or ACE-inhibitor treatment. Furthermore, gC1qR on the surface of EC and platelets can lead to complement activation resulting in the generation of complement derived vasoactive peptides, which can additionally contribute to the inflammatory process. Therefore, in this manner gC1qR has the potential to simultaneously activate the two most potent proinflammatory pathways of the blood – the complement and kinin-generating systems – and thus contribute significantly not only to the inflammatory processes, but also to the hypercoagulable and prothrombotic state that is often associated with malignancy. Because most proliferating cells and metastatic tumors upregulate the expression of gC1qR, it has the potential to be used as a tumor cell marker. Blockade with a monoclonal antibody recognizing the C1q site on gC1qR has also been found to inhibit tumor cell proliferation. Thus, because of its ability to engage in various disease processes, including infection, angioedema and cancer, gC1qR has become a useful target for the development of peptide-based and/or antibody-based therapeutic interventions. Indeed, Dr. Ghebrehiwet was recently awarded a US patent for the development and treatment of angioedema, and has developed an ELISA kit for the detection of soluble gC1qR, which was recently released to the market by HyCult Biotech Inc.

The major projects currently underway in Dr. Ghebrehiwet’s lab are: