Recently, cancer biologists have turned to 3D culture methods, which shows some advantages as compared with traditional models. Cells could form multicellular complex (spheroids) when they were maintained in suspension or embedded in some scaffold (often extracellular matrix). This approach allows the growth of 3D spheroids preferentially consisting of epithelial cells originated from established cell lines or clinical samples. Using this approach [1], we are generating collections of BC patient-derived spheroids for their comprehensive molecular analysis and for clinical application (candidate drugs evaluation) (Fig. 1a).

Organoid culture, instead, implies formation of 3D compositions that contains several type of epithelial cells. These structures are formed from single adult epithelial stem cell and allows to study the multicellular composition of tissue epithelia in a dish. Organoid culture was established for several tissue types: stomach, colon, and pancreas and for prostate, saliva glands and several other tissue [2]. However, there are no organoid cultures of urothelium have been generated yet. We developed the procedure for routine generation of urothelial organoids from normal urothelial for analysis and future molecular modifications (Fig.1b).

Organoids derived from adult stem cells can be used to directly model hereditary diseases such as cancer. Cancer can be displayed in organoid based on the principles of bottom-up model: when normal cells specifically modified to became more tumorigenic. Tumorigenesis is characterized by multistep genetic changes that results in inactivation of tumor suppressor genes and activation of oncogenes, which collectively drive cancer growth. For some cancers, like colon, the sequence of event driving tumorigenesis was revealed [3]. For bladder cancer the exact sequence of tumorigenesis steps is not determined yet, but recently the comprehensive set of genomic data became available[4]. The most efficient method for manipulation of gene activity is a recently developed gene editing CRISPR-based technology [5, 6].

Using established urothelial organoid system we are developing bottom-up model of BC, sequentially silencing tumor suppressor genes with CRISPR. Based on the bioinformatics analysis of these data and on the results of development transgenic animal models of bladder cancer we selected 7 tumor suppressor genes that more likely will be actively involved in bladder tumorigenesis. Introducing silencing mutations using CRISPR technology in organoid cell culture we expect to observe specific phenotypic changes in 3D cultured organoids. The combination of mutations will give us the model that can be analyzed and compared with original bladder tumors at different stages of development.  We are currently developing tracing options for molecularly-modified organoids. 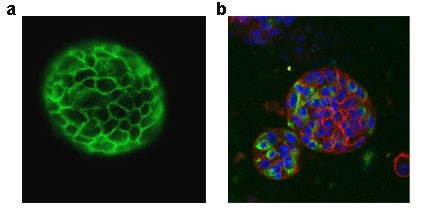 Orthotopic model of bladder cancer. Animal model is necessary for better understanding mechanisms of tumorigenesis. There are several types of rodent models for BC.  One approach is the development of transgenic models in which tumors can be induced in an organ-specific manner. Transgenic mice develop carcinoma in situ at ages 8 to 20 weeks following by high grade papillary carcinoma [7]. The drawback of transgenic models is that tumors tend to develop slowly and with less uniformity than desired. In addition, the high cost of maintaining a breeding colony has to be considered.

Orthotopic implantation of tumor cells has the benefit of short time frames for tumor establishment in commercially available mice. The tumor microenvironment can significantly influence tumor development and therapy response. It is, therefore, often desirable to grow tumor cells in the organ from which they originated. Several procedures for placement BC cells into bladder wall were recently described [8]. The most efficient and accurate model is the placement of BC cells or patient derived tissue samples directly into bladder wall under the guidance of ultrasound imager [9].

We applied this model and proved its feasibility using Vevo 3100 ultrasound imager.

We applied orthotopic ultrasound guided method of BC cell placement into bladder wall to test organoids, surgical sample for ability to form tumors in vivo.