MRI of the Retina

MRI of the retina is challenging because the thin retina necessitates very high spatial resolution and because the orbit is a region of high magnetic inhomogeneity which can cause several image artifacts. We have carried out a series of studies to demonstrate the capability and feasibility of multimodal MRI to study the retina. Among other retinal MRI techniques we have developed, we have implemented blood flow MRI of the mouse retina at 35x35 micron resolution. With this approach we demonstrated the feasibility of blood flow MRI to distinguish both the retinal and choroidal vascular layers with MRI for the first time. Using this method, we have investigated blood flow impairment in glaucoma and diabetes 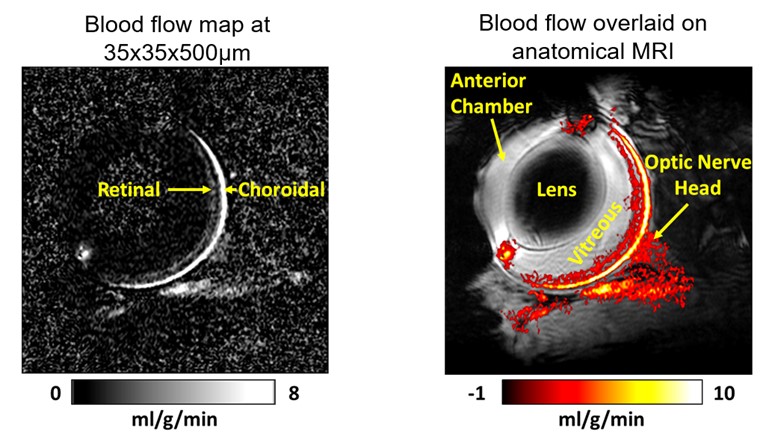 We have also translated many of these techniques to the human retina on standard clinical MRI scanners. 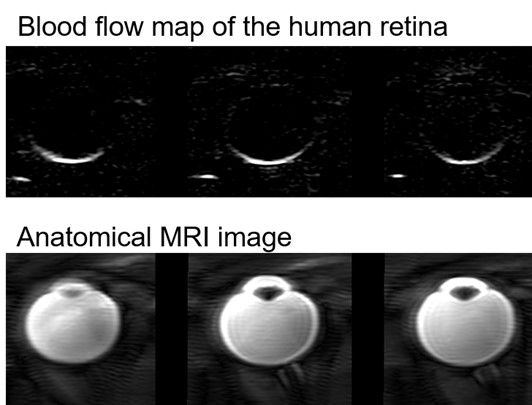 Vascular permeability of water
MRI can be used to measure the vascular permeability of water in the eye or the brain using deuterium oxide (D2O) as a tracer. Abnormal intraocular fluid flow or clearance is involved with a variety of eye diseases such as diabetic retinopathy, for which D2O MRI could potentially be applied to assess intraocular fluid exchange. We have developed high resolution D2O MRI to investigate dynamic imaging of D2O inflow into the mouse vitreous and aqueous humors.

1. Glaucoma is a disease which can lead to neurodegeneration in the visual pathway, from the optic nerve to the visual cortex. In patients with primary open angle glaucoma (POAG) we have found substantial structural and functional abnormalities in the visual system in the brain. The visual cortex is atrophied as indicated by reduced cortical area. White matter fiber-tracts of the visual pathway are also damaged as detected by diffusion MRI (fractional anisotropy).

4. Brain tumor metastases: Tumor cells were incubated with iron oxide contrast agent then delivered to mice. MRI was used to image the labeled metastatic cancer cells in the brain, showing as dark spots, providing a means to assess tumor cell burden. Disruption of the blood brain barrier occurred in regions with a high density of labeled cancer cells, as detected by dynamic contrast enhanced MRI with gadolinium contrast agent.