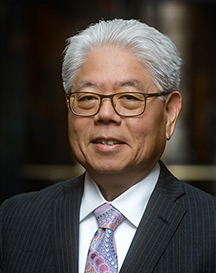 Peter Igarashi, MD, was named the Dean of the Renaissance School of Medicine at Stony Brook University beginning September 12, 2022.

A nationally recognized nephrologist, physician-scientist and medical-education innovator, Dr. Igarashi joined Stony Brook from the University of Minnesota Medical School, where he served as the Nesbitt Chair, Professor and head of the Department of Medicine. In this role, he oversaw more than 600 full-time and affiliate faculty, 100 adjunct faculty, and 240-plus residents and fellows. During his tenure, Dr. Igarashi increased National Institutes of Health (NIH) funding to the institution by 60 percent, worked to nearly eliminate gender compensation disparities, appointed women to prominent leadership positions, developed new multidisciplinary programs and created a new Office of Faculty Affairs and Diversity.

An active NIH-funded physician-scientist with research interests in polycystic kidney disease (PKD), transcriptional regulation, epigenetics and kidney development, Dr. Igarashi is the recipient of more than $25 million in NIH grant support over the years. He has published widely in medical periodicals (in English and Chinese), authoring nine chapters in textbooks and as an author of more than 100 peer-reviewed journal articles.

Prior to his position at the University of Minnesota Medical School, Dr. Igarashi served as chief of the Division of Nephrology and founding director of the NIH-funded O’Brien Kidney Research Core Center at the University of Texas Southwestern Medical Center in Dallas.

While at the University of Texas, Dr. Igarashi created services to provide regular kidney dialysis to patients in need of care who were undocumented and traditionally marginalized. Dr. Igarashi also supported an initiative where faculty used artificial intelligence to identify and optimize co-management of patients with hypertension, diabetes and chronic kidney disease in primary care practices — work that continues to be funded by the NIH.

Dr. Igarashi earned his medical degree from the UCLA School of Medicine and completed an internal medicine residency at the University of California Davis Medical Center. He then moved on to Yale University where he completed a nephrology fellowship and began his academic career in medicine.

For his outstanding achievements, Dr. Igarashi has been honored with an NIH MERIT Award and the Lillian Jean Kaplan International Prize in PKD, the highest honor in the field of innovative research and treatment for PKD.