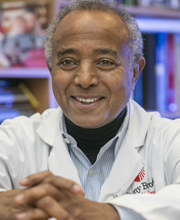 A Mentor for Life

“In Greek mythology, Odysseus asked his friend Mentor to take care of his son, Telemachus, when Odysseus left for the Trojan War,” Ghebrehiwet explains. “The English language adopted the personal name ‘Mentor’ to describe someone who shares his wisdom with an inexperienced individual.”

To Ghebrehiwet, mentoring is a service that returns to him as much as he gives to others.

“There is nothing more fulfilling than to offer a transformative research and educational experience in a nurturing atmosphere where fertile minds can thrive,” he says. “Mentoring is like ‘fertilizing’ a flowering plant, and seeing it blossom to its fullest brilliance. It requires a lot of patience and precious time, but in the end the outcome makes you feel proud and extremely happy. Most mentees become, in fact, part of your family.”

"We have never been in greater need of terrific mentors for biomedical scientists than now,” said Ken Kaushansky, Sr. Vice President for Health Sciences and Dean of the Renaissance School of Medicine. “Berhane has served as a role model for a scientist who takes an understanding of medical mysteries and solves them. He then takes it one step further in training the next generation of students, from high school to graduate school, who will become the next generation of outstanding biomedical scientists and mentors. His impact at Stony Brook has been exemplary.”

Ghebrehiwet came to Stony Brook from the Scripps Research Institute (SRI) in La Jolla, CA. He says he had great mentors there, mentioning Dr. Bokisch and Dr. Muller-Eberhard, “brilliant scientists who taught me how to be a perfectionist.” But it was someone he met briefly—when he came to SRI to give a talk—who instilled in him a special appreciation for the beauty of mentorship.

“A humble and brilliant man, Dr. Har Gobind Khorana—a Nobel Laureate who passed away in 2011—told me that when students come to your lab looking for an opportunity to work, look into their eyes, and if you see ‘fire,’ give them that chance, and you will not regret it.”

Ghebrehiwet knew exactly what he meant. “I was a shy person growing up, and I wanted people to see through me and recognize whatever talent I had, rather than me having to ask for what I wanted.”

Ghebrehiwet grew up in Eritrea, at the time a federated part of Ethiopia. In 1962, when he was graduating high school, Eritrea was supposed to hold a UN–mandated referendum to decide its future. Ethiopia, fearful that Eritrea might secede, abrogated the federation and declared Eritrea its 14th province, triggering a 30-year liberation war. Ghebrehiwet went abroad, studying in Poland, Berlin, and Paris. While awaiting an appointment at the World Health Organization, he was offered a job at Stony Brook, as part of a group that was establishing a new division of Allergy, Rheumatology, and Clinical Immunology.

“When I took the job in 1979, I had in mind to stay a couple of years, and then fly to Geneva and the WHO. What I thought was to be a short-term appointment ended up being a 35-year love affair with Stony Brook, which I have never regretted.”

He mentored from the very beginning. “My first mentee, during my first two summers, was a brilliant undergraduate from the University of Arizona, Bruce Randazzo. Bruce is now Senior Director of Clinical Research in Dermatology at Janssen Pharmaceuticals, a Johnson & Johnson company, while maintaining a faculty position in the Department of Dermatology at the University of Pennsylvania.”

Ghebrehiwet has guided students ranging from postdocs to PhDs, MD/PhDs, and MD with recognition students; undergrads in the the Stony Brook Women in Science and Engineering (WISE), Undergraduate Research and Creative Activities (URECA), and Honors Programs; and high school students, mainly through the Simons Summer Research Program.

“The first thing I try to instill is the love for investigative research, by encouraging them to think outside of the box, so they dream of ‘things that never were,’” he says. “The second thing I try to teach is that failure should never be a deterrent, but rather a stepping-stone towards success. Most importantly, I try to teach them honesty, and how to be good, caring and understanding citizens who can work with everyone, regardless of cultural or ethnic backgrounds, in any environment.”

His mentoring philosophy also draws from his coaching style. Ghebrehiwet played major league soccer in Ethiopia, varsity and second division league in Europe, and non-professional major league in San Diego. He has a National “A” coaching license from the US Soccer Federation, the highest coaching license you can get in the United States. Among the kids he has coached is Jeff Duback, a goalkeeper who played for Yale and the US national team that qualified for the 1990 World Cup.

“‘No, I cannot do this,’” is not an option I accept easily,” Ghebrehiwet says. “As an optimist, I believe anyone can be coached to be a disciplined student of soccer or science, if they can find a mentor who has the patience to guide them through the difficult initial learning phase. It may take one student longer to understand a concept than another, but in the end most, if not all, will be able to perform more or less on the same level.”

That’s his positive thinking at work. “I believe in the plasticity of the brain, and always try to raise the bar as high as possible and challenge the students to meet it. I also try to have a harmoniously working laboratory. A bad apple who cannot work with others will not be accepted in my lab, regardless how brilliant, unless he or she is willing to respect the lab’s working philosophy.”

He also recognizes the importance of diversity, as Stony Brook—like the rest of the nation—is becoming a more of a cultural melting pot. “A mentor should be able to understand each student’s cultural upbringing,” he says. “Some students can seem shy and unassuming, as they come from a culture where tooting your own horn is derided, and therefore do not tell you how good they are.”

Time and patience are key. “A mentor has to spend time to engage the students, not leave them with a technician or a postdoc, lest they feel that they are not good enough to talk to the mentor,” he says. “A mentor also has to be patient, and never criticize a student in front of others. A mentor should never get angry at students who make an honest mistake; this would send the hypocritical message that the mentor never made a mistake at that age. This is my mentoring approach and personal philosophy, and so far it seems to have worked for me, both in science and in life.”

The Proof Is in the Protégé

It’s worked for his protégés as well. Tara L. Huston was only 16 and a high school student when she came to work in Ghebrehiwet’s lab. She went on to become the first semifinalist at the Westinghouse Science Competition—the forerunner of the Intel Science Talent Search—and is now a Plastic Surgeon and Assistant Professor of Surgery at the Renaissance School of Medicine. Another mentee, Keri L. Peterson, at the time a medical student at Mount Sinai Medical School, received a National Institutes of Health training grant to work in his lab; she is now an internist at Lenox Hill Hospital and medical commentator for national media. Melissa J. Dalzell, while a Stony Brook MD with recognition student, selected Ghebrehiwet’s lab, and received the “Best Research Award” for her work at graduation; she is an Internist in Albany, NY.

Phoebe D. Lu was another protégé, and perhaps the one who best encapsulates Ghebrehiwet’s mentoring philosophy and success—if not some of his own personal qualities. “When she came to my lab for an interview at the beginning of her freshman year in Stony Brook’s Honors College, she was so respectful and shy that I could hardly get a word out of her,” he says. “However, behind that shyness I could sense there was a quiet confidence. So on a hunch, I accepted her on a trial basis. This was one of the best decisions I made, as Phoebe never left my lab until she graduated.”

As a mentee, Lu “not only co-authored several papers with me, remarkable for an undergrad, but is perhaps the only undergraduate student who has a first-author paper in a high-impact, peer-reviewed journal, Clinical Immunology.” Phoebe Lu, MD, PhD, is now a member of the American Academy of Dermatology and practices her specialty in New Jersey.

Ghebrehiwet not only remembers his protégés—he also remembered his native land. He was instrumental in establishing a University-to-University Linkage program between the University of Asmara in the Eritrean capital and a consortium of US universities, led by Stony Brook University, to assist the young nation get on its feet by educating its youth, especially in the health sciences.

“Most of my friends and classmates joined the Liberation movement; some after graduation, others having interrupted their education,” Ghebrehiwet says. “I was also contemplating joining them, but I decided to continue my education and help my friends by other means.” 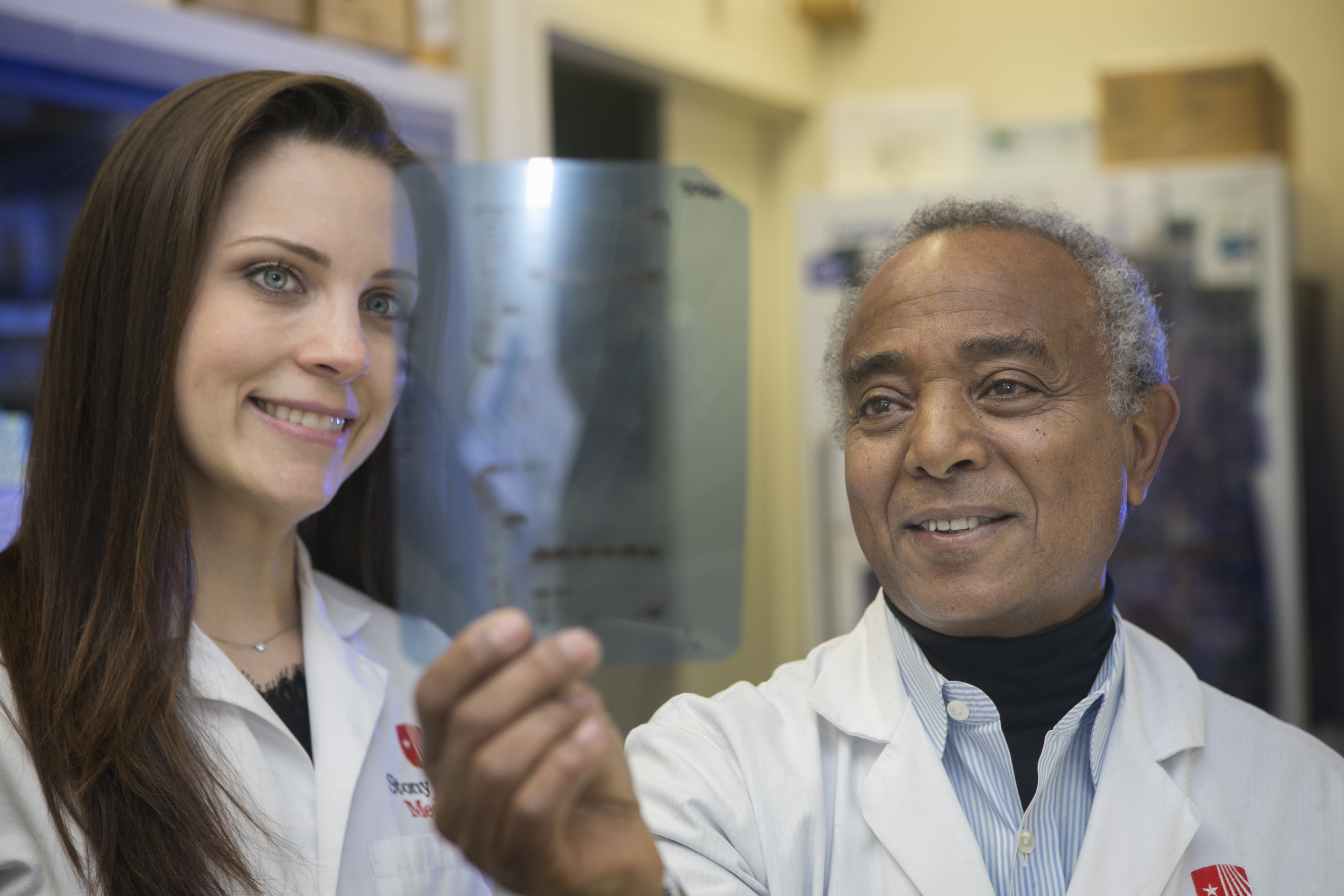