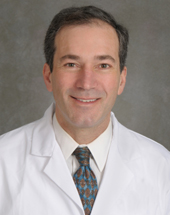 Dupuytren's contracture (bent fingers) is a chronic condition that affects the hands and potentially cripples them. It's named after the French anatomist and military surgeon who popularized and first operated on it in the early nineteenth century, Guillaume Dupuytren (pronounced DOO-pwee-tren).

The underlying disease that causes the contracture in the hand is called Dupuytren's disease, which may or may not result in bent fingers. In other words, the disease does not always manifest itself as contracture. That said, it's a chronic progressive medical disease.

If everyone with any degree of Dupuytren's disease were counted, it's fairly common. In the United States alone, the number of Dupuytren sufferers projects to about ten million people, according to the Dupuytren Research Group.

The contracture can impact people in many ways — from writing to washing one's body, from picking up small things to playing musical instruments, shaking hands, caressing a loved one, and so forth — because our hands are so important in every part of our day.

In addition to well-known familial and genetic causes, other environmental factors such as nicotine, diabetes, alcohol, and trauma are associated with causing Dupuytren's disease and contracture.

Here, Alexander B. Dagum, MD, chief of our Plastic and Reconstructive Surgery Division, answers frequently asked questions about this condition. A distinguished expert, he is fellowship trained in hand surgery as well as plastic surgery, and board certified in both specialties.

Q: What is Dupuytren's disease?

A: Dupuytren's disease is a progressive condition that affects the tissue underneath the skin that is called the fascia. The fascia is responsible for holding the palm skin taught so it does not slide around when one grips or grasps an object. Tough scar is laid down on the fascia that gradually contracts, leading to bent fingers that cannot be straightened.

Stony Brook Medicine is considered one of the world's foremost institutions
when it comes to the treatment of Dupuytren's disease.

A: The cause is unknown, but there is a genetic component. A positive family history, in particular, plays an important role in the development of Dupuytren's disease. Other factors known to make Dupuytren's disease worse are excessive alcohol consumption, diabetes, smoking, and epilepsy and certain antiepileptic medication

Q: How is Dupuytren's disease diagnosed?

A: Dupuytren's disease is diagnosed clinically by physical examination. It usually starts with a nodule in the palm underneath the skin that is firm and can initially be painful. There may be associated pits between the nodules that develop subsequent to this.

As the disease progresses, the nodules become cords underneath the palm and finger that start to contract and cause the fingers to bend.

Patients may also develop nodules over the dorsal knuckles known as the knuckle pads of Garrod or disease elsewhere, such as in the feet (Lederhose disease) or penis (Peyronie disease).

Q: Who gets Dupuytren's disease?

A: There is a genetic predilection to affect primarily people of Northern European or British descent. That is why it is also known as the Viking disease as it is felt it originated in people of Scandinavian ancestry and subsequently spread from there. However, it has been reported in all races. It affects men more often than woman, and usually starts after age 40.

A: The fingers progressively bend and contract, leading to inability to open the hand and decreasing hand function.

Q: Is there a cure for Dupuytren's disease?

A: There is no cure for Dupuytren's disease, but it can be treated with surgery or injections to remove or dissolve, respectively, the cords causing disabling contractures. 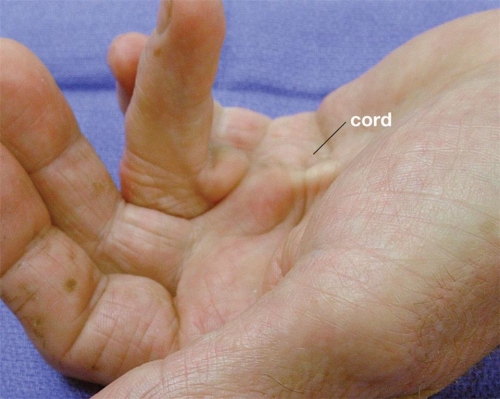 Q: What is Dupuytren's contracture?

A: When a hand cord caused by Dupuytren's disease leads to a bent finger that can no longer be fully extended, the condition is called Dupuytren's contracture.

Q: What are the risk factors for Dupuytren's contracture?

A: The risk factors for Dupuytren's contracture are the same as for the disease, but a strong family history, early onset of the disease (before age 40), disease in both right and left hand, associated disease in the knuckle pads, feet, or penis will increase the risk of developing contractures.

A history of diabetes, heavy alcohol consumption, smoking, and epilepsy and certain antiepileptic medications will also increase the risk of developing contractures.

Q: How does Dupuytren's contracture impact a person's life?

A: The inability to open the fingers fully may make it difficult to grip and grasp objects such as tools, instruments, a golf club, and so forth. The fingers also may get jammed and injured easily as the person reaches out to grab an object or puts their hand in their pocket.

Q: Can Dupuytren's contracture occur in any finger?

A: Yes, but it most commonly affects the ring finger followed by the small finger.

Q: How is Dupuytren's contracture treated?

A: Traditionally, Dupuytren's contracture is treated with surgery to remove the diseased fascia (tissue) and, thereby, correct the contracture.

Although the surgery is done on an outpatient basis, the recovery can be strenuous for some patients, and almost always requires a six-week course of hand therapy and splinting.

Recently, with the development of an enzyme (collagenase) known as Xiaflex, we can inject the cords in the office to dissolve the diseased cords, and subsequently 24 to 96 hours later manipulate the bent finger under local anesthesia, rupturing the cords and correcting the contracture.

Another method that has become popular is a minimally invasive surgical method known as needle aponeurotomy, where under local anesthesia a needle is used to break apart the cord.

Hand surgeons have come from all over the world to Stony Brook Medicine
to learn about Dupuytren's disease and its treatment.

Q: Which treatment for Dupuytren's contracture is better: surgical or non-surgical?

A: The early results for surgery versus enzyme injection have been equivalent. The long-term results are not yet available. The disease is not cured and, thus, recurrence or extension of the disease with the same or other contractures occurs in at least 20% of patients.

Q: What is the advantage of having Dupuytren's contracture treated at Stony Brook Medicine?

A: Stony Brook Medicine is considered one of the world's foremost institutions when it comes to the treatment of Dupuytren's disease.

The enzyme (collagenase) treatment known as Xiaflex used throughout the world to treat this disorder non-surgically was developed at Stony Brook.

Surgeons have come from all over the world to learn not only about Dupuytren's disease and its treatment, but also how to use Xiaflex to treat Dupuytren's contracture.

Several thousands of patients have been treated here with either surgery or enzyme injection, making Stony Brook Medicine not only the busiest but the most experienced center for Dupuytren's disease in the country.

Learn more about Dupuytren's disease and contracture. For consultations/appointments with our hand specialists, please call 631-444-8210. Watch this video (4:51 min) that tells a patient story: