History of the Department

"The Health Sciences Center at Stony Brook was conceived as an early and essential step in meeting the need for comprehensive healthcare [in New York State]." — Edmund D. Pellegrino, MD (read more) 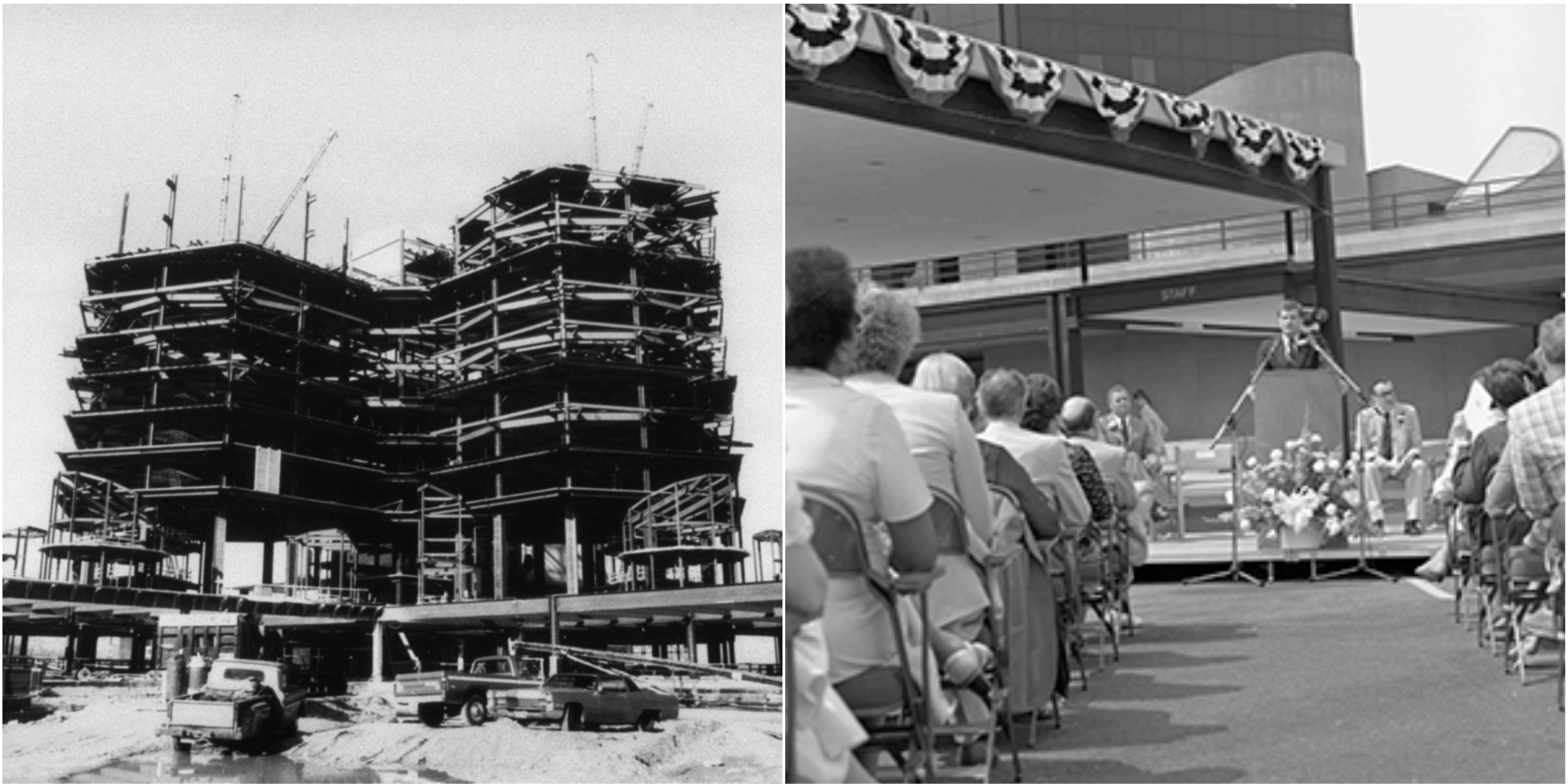 The Stony Brook University Department of Surgery was founded in 1974 following the opening of the university's School of Medicine, in 1971, under the visionary leadership of Edmund D. Pellegrino, MD, the first dean of medicine and first vice president of health sciences at Stony Brook (read more).

The founding chairman of surgery was Harry S. Soroff, MD, who assembled the original faculty and defined the leadership role and dynamic character of the department. Dr. Soroff had been recruited to build it, in 1973, by the second dean of medicine, Marvin Kuschner, MD.

Dr. Soroff came to Stony Brook from Tufts University, where he was professor of surgery and chief of surgery at Boston City Hospital, and where he also served as director of surgical research and co-director of one of the first clinical research centers established and funded by the National Institutes of Health.

Early in 1974, Dr. Soroff recruited distinguished professor Clarence Dennis, MD, PhD — famous for inventing the heart-lung machine and pioneering open heart surgery, as well as for building the surgery department at SUNY Downstate — to join the faculty and help build our department. Dr. Dennis arrived in 1975.

During the first several years of the department's development, prior to the opening of University Hospital in 1980, the Northport VA Medical Center was used as our primary clinical site with its newly opened medical-surgical facility of 440 beds.

Since then, the department's continued and steady growth has demonstrated its commitment to Stony Brook Medicine's four-fold mission of excellence in patient care, education, research, and community service. 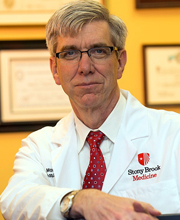 Mark A. Talamini, MD, joined the Department of Surgery as chairman in October 2013, the fifth in our history. He is a national leader with a history of surgical innovation.

During the first five years of his tenure, Dr. Talamini presided over the continued growth of the department's faculty, reaching a total of more than 60 full-time members.

The successes of his recruitment efforts include the addition of our chief of surgical oncology Aaron R. Sasson, MD; our chief of colon rectal surgery Deborah Nagle, MD; and our chief of pediatric surgery Christopher S. Muratore, MD.

The following developments in the progress and advancement of the department occurred under the leadership of Dr. Talamini: 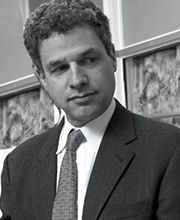 In 2009, Todd K. Rosengart, MD, was appointed chairman, after serving as interim chairman for a year. Dr. Rosengart joined our faculty in 2006 as chief of cardiothoracic surgery, and continued to serve in that role while chairman, as well.

By this time, the department's faculty had grown to 36 full-time members. There were five ACGME-approved residency and fellowship programs: general surgery; otolaryngology-head and neck surgery; colon and rectal surgery; vascular surgery; and surgical critical care.

Since the class of 1975, nearly 200 surgeons had been trained in our general surgery residency, establishing their practices throughout the United States and in several countries abroad.

Among the department's achievements under Dr. Rosengart's leadership are:

The department's history demonstrates the success of Stony Brook Medicine and its mission of excellence in patient care, education, research, and community service.

In August 2012, Dr. Rosengart accepted the position of chairman of the Michael E. DeBakey Department of Surgery at Baylor College of Medicine in Houston, TX.

During Dr. Rosengart's time at Stony Brook, the Department of Surgery grew and prospered. The faculty attained to nearly 50 full-time members.

The research and education programs, likewise, prospered under Dr. Rosengart's leadership, as seen in the launch of our Surgical Skills Center, our highly successful annual Research Day and a department research seed grant program, and in the full reaccreditation with commendation of the general surgery residency program, as well as accreditation of three fellowship programs.

With Dr. Rosengart's departure in November 2012, Alexander B. Dagum, MD, professor of surgery and chief of our Plastic and Reconstructive Surgery Division, became interim chairman of surgery. In the announcement of the change in leadership of the department, Kenneth Kaushansky, MD, sixth dean of medicine, stated that Dr. Dagum "epitomizes the term academic surgeon."

Serving as interim chairman for nearly a full year, Dr. Dagum maintained the department's course of progress. He oversaw the hiring of new faculty, and advanced our programs in patient care, education, research, and community service. 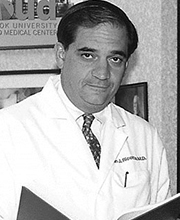 In 1996, Wayne C. Waltzer, MD, professor of surgery and chairman of urology (who had originally joined our faculty as an instructor in 1979), assumed leadership of the department. He served as acting chairman until June 1997, when John J. Ricotta, MD, joined the faculty as chairman.

Dr. Ricotta oversaw continued dynamic growth in the department, in particular the expansion of diverse programs in minimally invasive surgery, including the establishment of the multi-specialty Center for Minimally Invasive Surgery; the creation of the Education Division to bolster both resident and medical student teaching programs; and the establishment of the ACGME-accredited surgical critical care residency, colon and rectal surgery residency, and integrated (five-year) vascular surgery residency programs.

During his tenure as chairman, Dr. Ricotta grew the department's faculty significantly, hiring several of our current leaders who continue to distinguish the department's clinical and academic excellence; namely,

Several of our faculty's physician-scientists recruited by Dr. Ricotta are recognized today as not only national leaders in their fields but as international leaders.

The campaign to create the John J. Ricotta Professorship in Surgery was launched in 2015 to perpetuate the legacy of excellence of Dr. Ricotta's eight-year tenure at Stony Brook (read more). 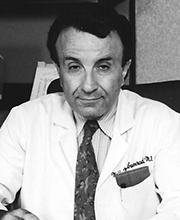 In 1989, Dr. Rapaport assumed leadership of the department, serving as acting chairman until Naji N. Abumrad, MD, joined the faculty as chairman in January 1992. Dr. Abumrad furthered the development of the department, establishing in 1993 our comprehensive Breast Center that became the Carol M. Baldwin Breast Care Center.

Also in 1993, the department was successful in gaining ACGME accreditation for its residency program in otolaryngology-head and neck surgery. In addition, during this period the department expanded its services to the East End of Long Island with the establishment, in 1994, of the Life Care Center in Hampton Bays.

The Abumrad years also saw the creation of the Plastic and Reconstructive Surgery Division, as well as the Surgical Research Division, which established a number of "core" laboratories available to all investigators within the department to facilitate their research efforts.

Another achievement of this period was that, in 1993, University Hospital gained its designation from the State Health Department as the Regional (Level I) Trauma Center of Suffolk County, under the direction of our Trauma Division and with the cooperation of the Department of Emergency Medicine.

In 1995, the department opened Long Island's only Skull Base Institute to provide multidisciplinary cranial base surgery. That same year, the department performed the county's first cochlear implant surgery, and began to provide the only service of this kind in the area. 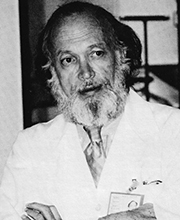 This early period saw the organization of our original educational consortium of hospitals (VA Medical Center, Nassau County Medical Center, Long Island Jewish Hospital, Queens Hospital, and Nassau Hospital which became Winthrop-University Hospital); the establishment of our general surgery residency program; and the implementation of our curriculum for medical students.

Dr. Soroff was chief of the original Gastrointestinal Surgery Division, which not only provided general surgical care, but also trauma care and burn care, first at the VA Medical Center, then at University Hospital. During the Korean War, Dr. Soroff had served for three years in the U.S. Army where he developed a special interest in the management of burn patients.

The Vascular Surgery Division and Transplantation Division had both been established in 1977, originally at the Northport VA facility. The chiefs of these two divisions, both of whom had major leadership roles in the department during their tenure here, were Fabio Giron, MD, PhD, and Felix T. Rapaport, MD, respectively.

The period immediately following the opening of University Hospital was one of prodigious clinical growth. During the 1980s, the department continued its transformation from a group of "generalists" into groups with more specialized skills both in the clinical areas and in research.

Since its founding 45 years ago, great things continue to happen in the department, and all signs at present indicate the future will affirm its history of excellence.

The 1980s witnessed the creation of the following clinical divisions:

In 1986, Stony Brook's president mandated a formal series of reviews of all clinical departments in the School of Medicine. These reviews were conducted by chairmen from other medical schools.

The reviewers of our department — Clyde Barker, MD; Arnold Diethelm, MD; and David Sabiston, MD — were, according to their report, "impressed with the competence demonstrated by the full-time surgical faculty, with the progress they have made in building the clinical and teaching programs, and with the enthusiasm they have for taking the next step" in further developing the department.

These reviewers, moreover, emphasized that the department's research programs were well based in both laboratory and clinical activity. This demonstration of excellence in patient care, education, and research measured up to the high standard the department set for itself.

"What of the future? Will the name of Stony Brook be associated with excellence and innovation?  Will our faculty be at the forefront of surgical progress? As founders, it is our responsibility to set the standards and hold a steady course which ensures that the spirit of scientific inquiry be nurtured and honored, not only as a suitable, but as an indispensable attribute of an academic surgeon. For only in this manner will we continue to maintain and enhance a fresh and modern approach to our clinical and teaching activities and develop ourselves into the superlative group we have the capacity of becoming." — Harry S. Soroff, MD, "Preface," Selected Published Works of the Surgical Faculty (1982)