Time to Learn about Common Problems Children Have in the Ear, Nose, and Throat 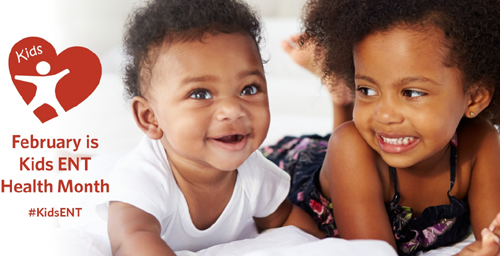 While children can be affected by ear infections, tonsillitis, or sinusitis, or other ailments of the ear, nose, and throat at any time, they can be especially frequent during February and the other coldest months of the year.

Tonsillectomy with or without adenoidectomy is one of the most common procedures performed in children, with over 470,000 done every year.

Tonsillitis is an infection of the tonsils, which may be caused by a virus such as the common cold, or a bacterial infection, such as streptococcus (strep throat).

The pharyngeal tonsils are found in the throat and can often be seen as two round masses in the back of either side of the mouth. Adenoids are at the back of the nose and above the roof of the mouth or palate, and cannot be seen through the mouth or nose without special instruments.

There are also lingual tonsils found at the very back and deepest part of the tongue. The tonsils and adenoids are a part of the immune system called lymphoid tissue. They help produce antibodies to fight infections in the body.

If the tonsils are affected by a virus, no medicines are needed, and children should get better after 7-10 days.

Strep throat infections caused by the bacteria Streptococcus pyogenes can be treated with antibiotics.

Children with strep throat often have a high fever, swollen lymph nodes in the neck, or pus on the tonsils. They may also complain of throat pain, or stomach pain, fatigue, or difficulty eating and drinking.

If your child has a sore throat, most pediatricians' offices can perform a rapid strep test and/or a throat culture to confirm if there is a streptococcus infection by swabbing your child's throat.

If your child has frequent recurrent episodes of tonsillitis, they may benefit from tonsillectomy.

Signs of enlarged adenoids may include breathing through the mouth instead of the nose, nasal congestion, a muffled voice, or noisy breathing during the day. Enlarged tonsils may cause difficulty swallowing.

If your child snores, or gasps for air or stops breathing at night, they may have sleep apnea.

Sleep apnea is as common as 1-4% in otherwise healthy school-age children. Because of the frequent disturbance in their sleep, they may be very tired during the day, have problems with their concentration and difficulty with performance in school, or have problems with bed-wetting.

If your child has sleep apnea, or OSA, taking out the tonsils and/or adenoids may help with these behaviors.

The gold standard for the diagnosis of OSA is called a sleep study (technical term is polysomnogram). During a sleep study, your child would spend the night at a testing center with monitors while they sleep. These monitors record brain waves, oxygen level in blood, heart rate and breathing, as well as eye and leg movements.

However, not all children may need a sleep study to diagnose OSA. Experienced ENT specialists like our team at Stony Brook Medicine can help to evaluate your child if you suspect he or she may have sleep apnea.