Update on Pelvic Pain Caused by Varicose Veins: What Women Need to Know 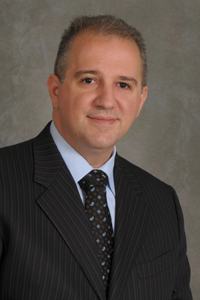 Chronic pelvic pain (CPP) is very common in women and can potentially lead to significant disability. Approximately one out of every three women will suffer from pelvic pain at some point during their lifetime.

CPP is defined as pain that occurs in the pelvic area (below the belly button) and lasts for at least six months. It may or may not be associated with menstrual periods.

One of the possible causes of CPP is the presence of varicose veins around the ovaries and uterus. In normal pelvic veins, blood flows through the ovarian veins toward the heart. The ovarian veins, like veins throughout the body, have one-way valves that prevent blood from flowing backwards.

When the ovarian veins dilate (stretch beyond normal dimensions), the valves do not close properly, resulting in backward flow of blood, also known as reflux. Consequently, there is pooling of blood within the pelvis that may lead to pelvic varicose veins and pain.

This condition along with the presence of relevant symptoms has been known as pelvic congestion syndrome (PCS).

Symptoms of PCS may include non-cyclic pain, heaviness, bloating or aching in the pelvic area which worsens with prolonged standing and can be relieved with lying down.

Some patients may experience worsening of symptoms during their menstrual cycle or after sexual activity. They may also experience frequency of or pain during urination.

Pelvic varicose veins as a possible cause of chronic pelvic pain tend not to loom large for most physicians,
so an evaluation by a vein specialist with expertise in pelvic vein disease is needed for proper care.

The fact that these symptoms can have a range of causes and that pelvic varicose veins tend not to loom large for most physicians necessitates an evaluation by a vein specialist with expertise in pelvic vein disease.

The cause of PCS is unclear. However, the possibility of anatomic or hormonal abnormalities or dysfunction can contribute to its development. Most of the affected women are between the ages of 20 and 45 years, and have a history of two or more pregnancies. 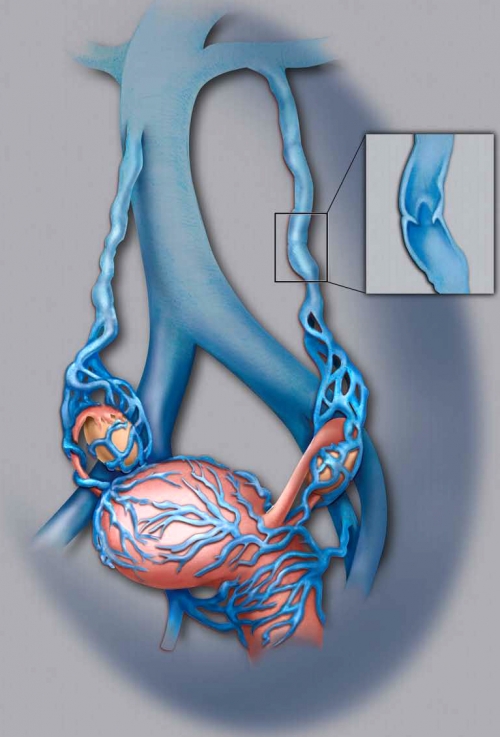 The good news is, we have a minimally invasive non-surgical way to treat PCS (read more). The bad news is, PCS remains poorly understood by the vast majority of physicians. As a result, women with PCS too often do not receive the care they need and the pain relief they seek.

The latest good news is that increased efforts are now underway to improve awareness of this clinical condition.

Historically, the different venous causes of pelvic varicose veins have been independently described as an unrelated group of "syndromes" (pelvic congestion, May-Thurner, nutcracker) that refer to specific anatomic aberrations but fail to completely account for the underlying vein-related causes and overlapping spectrum of symptoms and signs.

For this reason, PCS has recently been renamed pelvic venous disorder (PeVD) which incorporates all the potential different causes of pelvic varicose veins.

Although there has been increased PeVD awareness in recent years by vascular/vein specialists, it continues to be underdiagnosed and undertreated, even by OB-GYN specialists.

In a recent study, 8% of premenopausal women with CPP of unclear causes were found to have dilated pelvic veins on CT scan which could have explained the reason for their CPP.

The latest good news is that increased efforts are now underway to improve awareness of PeVD,
and we at Stony Brook Medicine are active members of the progress team to advance care for women.

To advance the care of women with PeVD, a multidisciplinary pelvic work group has initiated several projects to increase knowledge about it. This group includes vascular surgeons, interventional radiologists, and vein specialists.

The pelvic work group is collaborating with multiple medical societies and organizations around the world — some of which are the American Vein and Lymphatic Society, American Venous Forum, Society of Interventional Radiology, European Venous Forum, International Union of Phlebology, American College of Obstetricians and Gynecologists, and International Pelvic Pain Society — which are endorsing and supporting these projects. 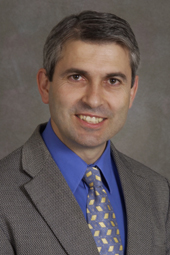 I myself am part of the pelvic work group, along with my divisional colleague here at Stony Brook, Nicos Labropoulos, PhD, director of our Non-Invasive Vascular Laboratory, who is recognized internationally for his major contributions in the diagnosis and management of vascular diseases. (See our publications on PeVD.)

At Stony Brook Medicine we have already developed a diagnostic protocol to identify PeVD using non-invasive ultrasound. We also have published clinical work to enhance our understanding about PeVD and participating in several new projects on this field.

The first task of the pelvic work group has been to develop a classification system for PeVD. It is almost complete, and is now being prepared for publication. A PeVD treatment descriptive tool is also being developed to help define an effective treatment strategy based on the classification system as it relates to the type and location of disease.

The next step is to create a quality-of-life questionnaire that is specific for PeVD, and to validate this tool. This project is in its early phases. A protocol for a multicenter randomized study of the tool, plus the effect of treatment, is currently under design.

In March, a multidisciplinary panel assembled by the Society of Interventional Radiology published a paper presenting its recommendations for future research needed to close the multiple evidence gaps that currently exist related to PeVD. It also gives a good account of why physicians who are not vein specialists rarely consider the diagnosis.

Given the lack of broadly accepted methods to evaluate and diagnose women, the potential that some are being treated inappropriately with pelvic venous interventions is also concerning.

The panel recommended international multidisciplinary involvement in the research agenda with the goal of gaining broad endorsement of the disease definitions and tools.

The panel was clear that it is necessary to first develop the required research tools to ensure that the financial and time investments made to support PeVD research would yield evidence that will be broadly accepted.

Our participation as members of the pelvic work group — based on our extensive experience in the diagnosis and treatment of PeVD — is part of the current effort to advance care for women with it.

The Stony Brook Center for Vein Care will continue to serve as a leader to provide women with a PeVD the most appropriate care to relieve their pelvic pain and help them to return to an active life.

Learn more about pelvic venous disorder and the experience women have with it as described by them. To schedule an appointment with our vein specialists, please call 800-345-VEIN (8346).