People with Carotid Artery Disease Are at Increased Risk 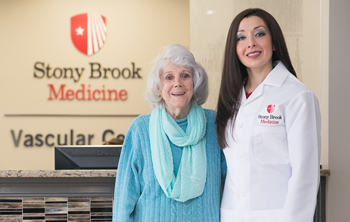 Dr. Angela A. Kokkosis with patient.

Stroke, or brain attack, can affect people of all ages and backgrounds. It is the No. 5 cause of death and a leading cause of disability in the United States.

A stroke occurs when a blood vessel that carries oxygen and nutrients to the brain is either blocked by a clot or bursts (or ruptures).

Every year, more than 300,000 Americans are diagnosed with blockages in their carotid (neck) arteries that carry blood to the brain. This condition can lead to a dangerous stroke.

This minimally invasive procedure treats carotid artery disease, and is clinically proven to protect against stroke both during and after the procedure.

Stony Brook was the first hospital on Long Island to offer this revolutionary procedure (read more).

Carotid artery disease is a blockage or narrowing in the arteries that carry oxygen-rich blood to the brain. These arteries are located in the neck, one on each side.

The blockage, caused by cholesterol-filled plaque, reduces the amount of blood that flows to the brain. Because the blood isn't flowing normally, blood clots can form or small pieces of plaque can break off and travel to the brain, causing a stroke.

Every year, 15 million people worldwide suffer a stroke, and carotid artery disease is estimated to be the source of the stroke in up to one third of patients.

There currently are multiple treatment options for stroke prevention. If the blockage or narrowing in the artery isn't severe, lifestyle changes and regular monitoring may be the only action required.

If the disease is more advanced, our vascular specialists provide three different treatments depending on the individual patient and degree of severity:

The procedure is a major advance in treating carotid artery disease. Here's how it's done:

The stent that was placed in the artery stays in the body permanently, to keep the artery open and the blood flowing normally.

It has been shown that over ten years, the degree to which the artery stays open after the TCAR procedure is equivalent to the results of the CEA surgery. And because TCAR is less invasive than traditional surgery, there's a lower chance of complications.

"I can't emphasize how important this is in the field of vascular surgery," says Angela A. Kokkosis, MD, director of carotid interventions at the Stony Brook Vascular Center.

"It's a treatment revolution for people who are at risk for strokes because of carotid artery disease."

Who Is Eligible for TCAR?

To determine eligibility for TCAR, there are very strict criteria based on Centers for Medicare and Medicaid Services (CMS) guidelines as well as guidelines from the company that developed TCAR.

Generally, patients who have never had a stroke and have blockage greater than 80% but less than 100% are good candidates for TCAR.

In addition, current guidelines are that TCAR may be right for patients with carotid artery disease who are considered high risk for traditional open surgery.

Factors that make a person high risk — meaning the open surgery is not a good choice for them — include older age, anatomic issues or previous cancers or surgeries that may make the carotid blockage surgically inaccessible, and other medical conditions such as severe heart or lung disease.

TCAR is appropriate for patients of any age, though people who need carotid intervention are generally older. The average age of patients treated with TCAR recently at Stony Brook has been 75. The procedure is covered by Medicare.

After a stroke, many patients lose their quality of life. By reducing the incidence of strokes and the debilitation they can cause, TCAR can preserve quality of life for people with carotid artery disease.

Due to the excellent outcomes patients are experiencing from TCAR, it is expected that the guidelines for who can get the procedure will be expanded to include a broader range of people with carotid artery disease.

Stony Brook has performed more TCAR procedures than any hospital on Long Island, and we are second in New York State in terms of number of patients treated with TCAR.

At Stony Brook, TCAR is performed by Dr. Kokkosis as well as by her vascular colleagues, George J. Koullias, MD, PhD, Shang A. Loh, MD, and Apostolos K. Tassiopoulos, MD, chief of vascular and endovascular surgery.

For consultations/appointments with our specialists in stroke prevention, please call 631-638-1670. Watch this video (3:14 min) featuring Dr. Kokkosis who explains carotid disease and TCAR: